Copyright Registration for Your Podcast

This blog posting uses the term podcast; however, these guidelines for copyright registration apply to any original audio recording you produce.

Submit Your Application Electronically or On a Paper Form

Determine Which Elements of the Podcast You Own

How to Copyright Protect Your Work. Part One.

How to Copyright Protect Your Work. Part Two.

Copyright Protection for Internet Content. Part One. – Some Basics

Why You Must Check the Status of Your Copyright Registration Application

The Cyber Citizen’s Guide Through the Legal Jungle includes a sample of a completed copyright registration application for a podcast with explanatory notes. 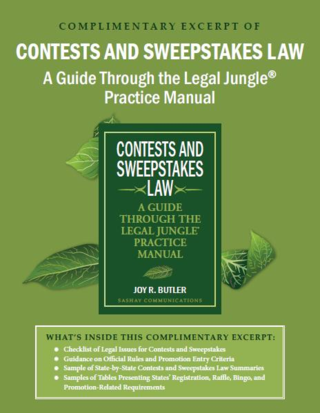 Attorneys and Legal Professionals, use the book to jumpstart your legal analysis and save hours of research time with the synopsis and citations provided for United States federal law and the laws of each state.

The Complete Book is available for purchase at the book website and at online and retail bookstores including amazon.com and barnes & noble. Free 40-page excerpt is available here.

Posted by Joy Butler at 10:20 AM in Contest and Sweepstakes Law | Permalink | Comments (0)

Sampling entails using portions of existing music in your new recording. For example, suppose you sample “I Will Always Love You” for a track on your forthcoming album.

Sampling may sometimes qualify as a fair use meaning your unauthorized use of the music is not copyright infringement. Unfortunately, there is no bright line rule for fair use. Using eight or four or even two bars of music does not guarantee a fair use determination. Instead, fair use depends on the specific circumstances of each situation.

As a result, it is risky to rely on fair use for sampling. Most commercially released albums obtain licenses for all sampled music. Which licenses you need depends on how you sample.

Licenses for Sampling the Song

Licenses for Sampling the Sound Recording

For an explanation of how songs differ from sound recordings, see the posting, What Is a Music Copyright?

Protecting a Title (of a book, film, song, etc.)

No Copyright Protection for Titles

First, know that copyright law does not protect titles. Titles are too short to qualify for copyright protection.

Other Ways to Protect the Title of a Single Work

Secondary meaning exists when "the title is sufficiently well known that consumers associate it with a particular author's work”. It is okay if the "particular author" is unknown, as long as consumers believe the mark refers to a "single source, even if that source is anonymous." When determining the existence of secondary meaning, courts look at factors such as the scope of sales and advertising, length of use, the number of sales, and the number of customers.

Here are examples of titles determined by courts as having secondary meaning:

Bridge on the River Kwai. A 1957 film that was viewed by millions of people, won several Academy awards, and was the 58th highest grossing motion picture of all time (at the time of the court's analysis in 1998).

The Book of Virtues. This 1993 book authored by William Bennett and published by Simon & Schuster was on The New York Times bestseller’s list for 88 consecutive weeks, sold more than 2.2 million hardcover copies, was an alternate selection for "The Book of the Month Club", and was advertised extensively in national publications .

Top Gun. This film had advertising expenditures in excess of 17 Million Dollars and grossed 72 Million Dollars within the first 72 days of its release in United States theaters.

Most states have laws forbidding "passing off," a form of unfair competition. In colloquial terms, passing off laws prohibit a person from using a deceptively similar title to your movie/book/song’s title in a fraudulent attempt to siphon the good will you have established in the product.