An upside to being a lawyer whose practice includes entertainment law is the occasional invite to a cool event. Such was the case last Thursday when I served as a judge at a Battle of the Bands event hosted by Law Rocks at the 9:30 Club in the District of Columbia.

Law Rocks is a nonprofit organization that organizes concerts around the globe with proceeds going to local charities within the host city. There have been Law Rocks concerts in London, Sydney, Dubai, Los Angeles, San Francisco, New York, Boston, and Philadelphia. Thursday’s concert was the first in Washington DC.

As a judge, I did not deduct points from any band for a name that some might view as mildly dorky. In fact, I embrace the dorkiness. When I form my musical group of legal professionals, we will call ourselves Boilerplate – in homage to the transactional nature of my law firm practice.

Each performing band rocks (i.e., raises funds) for a specific local charity. A nice touch at Thursday’s 9:30 Club concert was having a representative from each band’s selected charity introduce the band as the band took the stage.

If Law Rocks comes to your city and you have the opportunity to serve on the Rock Panel of Judges, I highly recommend accepting. The evening was a blast and Law Rocks takes good care of its volunteer judges with complimentary car service, V.I.P. seating, food, and libations. 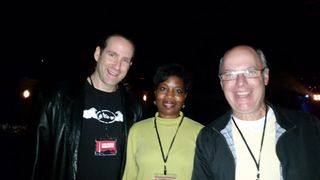 Congratulations to Law Rocks for a successful inaugural DC concert event offering a good time to a bunch of good people for the benefit of several good charitable causes.

Lego blocks – a child’s toy – has stirred up a political, censorship, and product placement controversy.

For an upcoming exhibit at the National Gallery of Victoria in Melbourne, the Chinese artist and dissident Ai Weiwei decided to build two works using Lego construction blocks. One work tentatively titled “Lego Room” is to consist of mosaic portraits of advocates for human rights and Internet freedom including controversial figures such as WikiLeaks founder Julian Assange. The second work is to be a new version of the artist’s 1995 photo triptych, “Dropping a Han Dynasty Urn.”

This is not the first Ai Wiewei exhibit based on Lego blocks. In 2014, he did an exhibit at San Francisco’s Alcatraz prison which work including Lego-block-based portraits of 176 prisoners.

Reaction by the Lego Group

Danish toymaker, The Lego Group, refused to fill the bulk order of several million blocks needed for Ai Weiwei’s project. A Lego Group spokesman, quoted in the New York Times, explained that the company rejected the order because the company “. . . refrain[s] — on a global level — from actively engaging in or endorsing the use of Lego bricks in projects or contexts of a political agenda.”

Questions abound as to whether the Lego Group’s non-political stance was in fact political and as to whether refusing to fill the bulk purchase is censorship. For me, as an attorney whose practice includes licensing issues, the conflict also interests me from a rights clearance and product appearance perspective.

The questions of whether one can incorporate brand-named products arise frequently. Products with brand names have a way of popping up – sometimes unexpectedly – in artwork, film, productions, advertisements, and other media. While conservative media producers eschew the risks from the unlicensed appearances of brand-name products in their works, several United States court rulings sanction the unauthorized appearance of a brand-name product in a production as long as the appearance does not

Courts are particularly willing to accept an unauthorized product placement when used for social commentary. Perhaps no company has learned this lesson better than Mattel, the maker of the iconic Barbie Doll. According to the courts, all the following are legally acceptable:

In contrast, featuring iconic products and their logos in non-related advertisements without a license can have dire consequences.

Back to the Lego Blocks

One commenter compared the Lego Group’s withholding of blocks to the withholding of paint, pens, or a camera because one doesn’t like the painting, book, or film that will be created from that material. If one considers the Lego Group’s mission statement, as shared on its website, “to inspire and develop the builders of tomorrow”, the comparison has some validity.

On the other hand, there are distinctions between those Lego blocks and paint, pens, or film -when being used as the basis for art. Typically, when we view a painting, book, or film, we don’t necessarily know the brand of paint, pen, or film used for the work. In contrast, each Lego construction block carries the trademark, Lego, so Lego is front and center for visual works constructed with the blocks.

Meanwhile, Ai Weiwei’s social media posts and subsequent news coverage about the conflict have generated numerous offers from around the world of contributions of the toy blocks. Hence, it appears that the artist will get the Lego blocks – as well as some “you just can’t buy that kind of” publicity – for his upcoming art project.