This two-part blog posting provides a summary of my Avatars and Virtual Reality presentation at the Summit on the Hill event organized by the 2016 DC Independent Film Festival and hosted by the Congressional Entertainment Industries Caucus. In Part One, I discussed the relevance and importance of right of publicity and other rights clearance considerations. In this Part Two, I offer suggestions for minimizing legal risks when producing and distributing creative materials containing avatars based on real people.

Getting Permission Is the Safest Route

The safest approach is to get permission from the person you want to depict as an avatar. With a written agreement, you can resolve issues involving publicity rights, privacy rights, and defamation.

Caveat. If you go the permission route, respect the parameters of the agreement. For the Band Hero video game, Activision Publishing had the permission and participation of members of the band, No Doubt. The No Doubt band members even participated in a full-day motion capture photography session. However, Activision went beyond the scope of the agreement by allowing video game players to unlock band member avatars and manipulate the avatars to sing songs by other musical artists. Even though they signed a permission agreement, the No Doubt band members pursued Activision for right of publicity and other claims in a lawsuit that survived Activision’s anti-SLAPP dismissal attempts.

If You Don’t Have Permission

If you use the avatar without the person’s permission, avoid using any indicia of the person to market or advertise the film, game, etc. There may be some exceptions to this no-advertising-use principle if you determine that the person is deceased and has no post-mortem publicity rights. Examples of deceased famous people who have been found to have no post-mortem publicity rights include Albert Einstein and Marilyn Monroe.

You can also decrease potential risks if the depiction is a parody, is newsworthy, or is a small component of the overall work. Of course, structuring the depiction in this manner might not be possible for all projects.

Use caution when collecting underlying materials for construction of your avatars and virtual world.

Materials Posted Online. Hopefully, everyone knows that just because material is posted online does not mean the material is available for use by anyone and in any manner.

Stock House Materials. I favor and encourage the use of stock materials as a less expensive, less risky, and administratively easier manner in which to obtain creative elements to incorporate into your work. However, even the use of stock materials is not always risk free. As I have previously blogged, just because you license the material from a reputable stock house does not mean your specific use is acceptable. The license granted by the stock house frequently includes only rights related to the copyright of the image and leaves the licensee on its own to determine if any other rights are needed. Some stock houses restrict how stock materials may be used with computer software and games including virtual worlds and simulation and training environments. Hence, it is crucial to read and understand the stock house’s license agreement.

Legal Issues for Avatars and Virtual Reality. Part One. The Right of Publicity.

On Thursday, March 3, 2016, I participated in a panel discussion on Virtual Rights and Avatars organized by the 2016 DC Independent Film Festival and hosted by the Congressional Entertainment Industries Caucus at the Congressional Cannon House Office Building.

An avatar is an animated or graphical representation of a real person. During the panel, my remarks focused on rights clearance issues and risk-minimizing techniques for producers using avatars in their creative works. Although the target audience consisted of filmmakers, the information is also relevant to anyone incorporating real people into creative media or commercial advertisements. Here is a summary of my presentation.

Like any other film maker or producer of creative materials, filmmakers using avatars need to clear rights. Proper rights clearance means determining there is no material in your film that is going to get you sued or prevent distribution of your film. The most typical rights a filmmaker clearing rights will be concerned with are copyrights, trademarks, and, if the film portrays or mentions real people, the right of privacy, the right of publicity, and libel claims. 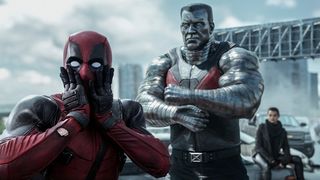 Technology rights represent a unique right that filmmakers using motion capture need to consider. If you are using motion capture technology for your film production, you want to make sure you have the right to use that underlying technology. As an example, the Michael Jackson hologram creation shown at the 2014 Billboard Awards and the facial animation technology used in movies like Deadpool (pictured) have sparked patent infringement and copyright claims saying those producers didn’t have the right to use the technology.

What Is the Right of Publicity?

Right of publicity claims are perhaps the most common type of claim made against producers introducing animated or virtual characters based on real people – and that is the right on which my remarks focus.

The right of publicity is a person’s right to commercialize or profit from his persona.

The right of publicity is why you may not use Woody Allen’s picture to advertise your clothing line. An activity that cost American Apparel a $5 Million settlement fee.

The right of publicity is why you should not post to Facebook or Twitter an image of Katherine Heigle carrying bags of your merchandise as a way to promote your chain of drugstores. That activity resulted in a lawsuit seeking $6 Million in damages from Duane Reade. (Heigle dismissed the lawsuit against Duane Reade after the two parties settled on terms that were confidential but “mutually beneficial”, according to Ms. Heigle’s attorney.)

And the right of publicity is why you may not use the name, image, voice or other identifying characteristic of any famous person – or even non-famous person – in a commercial context without their permission.

But can one legally use elements of a person’s identity in a non-commercial, non-advertising context? Such as for the basis of a character in a film or video game. The short answer is sometimes, you can – depending on the specific circumstances of your use. The longer answer is a bit more complicated.

There is a balancing act between an individual’s right of publicity on one side and a producer’s First Amendment rights on the other side. You may not use the right of publicity, copyright, trademark, or any other intellectual property rights as a means to stop people from expressing themselves, from giving their opinions, or from otherwise using their First Amendment rights.

The tricky part to the above proposition is determining just how to strike that balance. Courts have been inconsistent in their approaches to weighing publicity rights against First Amendment rights. There are at least five different tests used by the courts. I provide an oversimplified explanation as well as examples of each below.

For example, Electronic Arts did not have a First Amendment right to depict college football players in NCAA video games (pictured on right) and, at least according to the Ninth Circuit Court of Appeals, Electronic Arts likely does not have a right to use avatars of NFL players in the Madden NFL video games. (More on the Madden case below.) In the court's view, recreating the athlete in the setting in which he acquired fame is not sufficiently transformative to merit First Amendment protection. 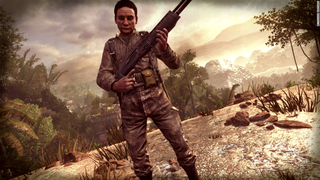 The Transformative Work Test. While some courts have focused only on the depiction of the person when evaluating transformation, other courts have focused on the work as a whole – the whole video game or the whole film.   When looking at the whole work, a California court found that it was permissible for Activision Blizzard to use a likeness of Manuel Noriega in the video game Call of Duty: Black Ops II (pictured on left). In finding sufficient transformation to merit First Amendment protection, the court focused on factors such as

Newsworthy; Topic of Public Concern. Some courts, rather than focus on transformation, weigh whether the depiction of the person is used in a manner that is newsworthy or introduces a topic of public concern. For example, in a 2016 case, the Eleventh Circuit Court of Appeals found that the public's interest in merchandise bearing the name and likeness of civil rights icon Rosa Parks outweighed Ms. Parks’ publicity rights (being enforced by the non-profit corporation that administered her publicity rights). Accordingly, Target stores may continue to offer for sale books, movies, and plaques featuring Ms. Parks’ name and image.

The Rogers Test comes from trademark law and was first applied to cases in which people objected to their trademark or personal name being used in the title of a creative work.

When applied to the right of publicity, the Rogers Test yields to the First Amendment if the depiction of the person is artistically relevant to the work and the depiction is not misleading in some way by falsely suggesting that the depicted person sponsors or endorses the work.

The Predominant Test recognizes that creative works often have both commercial elements and expressive elements. Hence, a court applying this test asks whether the dominant purpose of the depiction is to exploit an individual’s commercial value or to make an expressive comment about the person. The former purpose leads to a publicity rights violation; the latter purpose is a First Amendment-protected use. The Missouri Supreme Court’s use of the predominant test when evaluating a Spawn comic book villain loosely based on former National Hockey League player, Anthony (Tony) Twist resulted in a $15 Million damage award against the creator and others associated with the comic book series.

Many point to the Spawn case, which is Doe v. TCI Cablevision, 110 S.W.3d 363 (Mo. 2003), as illustrative of the inconsistency and unpredictability generated by the divergent First Amendment-right of publicity balancing mechanisms. In a case with strikingly similar facts to those of the Spawn case, a DC Comics comic book edition depicted performing and recording musicians, Johnny and Edgar Winter, as half-worm, half-human villains. The Winter brothers lost their right of publicity lawsuit against DC Comics. The California Supreme Court, applying the transformative work test, ultimately found that the non-literal depiction of the Winter brothers contained significant, expressive content and was synthesized into a larger, very expressive story. Accordingly, the Winter brothers’ depiction warranted First Amendment protection.

Will the Supreme Court Provide Clarification on Correct Balancing Test?

The Supreme Court has not yet announced whether it will hear the case.

Given the uncertain manner in which a right of publicity case might be decided, what should a producer who wants to use avatars do in order to sidestep potential legal problems? I’ll tackle that question in Part Two of this blog posting.